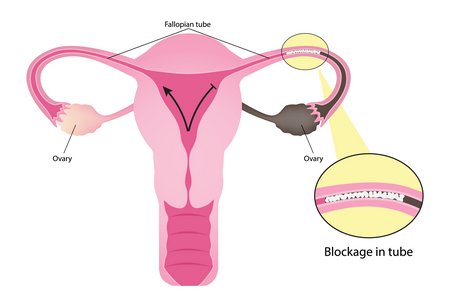 Fallopian tubes speak with the uterus toward one side and with the ovary on the other. At the point when the egg is delivered by the ovary (ovulation), both of the fallopian tubes gets the egg and gradually moves it towards the uterus. Sperms are kept in the vagina at the hour of sexual contact. They swim up through the uterus into the tubes, where on the off chance that an egg is available, the two meet and fertilization happens. The fertilized embryo is then moved by the tube gradually over the course of the following five days to the uterus, where if the embryo implants, pregnancy ensues. Working fallopian tubes are subsequently fundamental for pregnancy to normally happen. Assuming the two tubes are blocked, the possibilities of unconstrained origination are exceptionally remote.
Symptoms
Trouble in conceiving may be the main side effect present in a woman having fallopian tube blockage.
Woman having blocked fallopian tube might show side effects like pain in the pelvis or tummy.
Women can experience the ill effects of this aggravation routinely at the hour of their period or can be consistent.
At the time blockage of the fallopian tube might make a treated egg to get stuck in the tube. This is named as an ectopic pregnancy. This isn't identified in an output at first and a woman can show side effects of pregnancy, for example, stomach pain on one side of the body, vaginal dying. You ought to continuously counsel a specialist on the off chance that you see such side effects.
Causes
The fallopian tube can be blocked  because of many reasons. few of the condition are discussed below
1) Having a pelvic contamination history
2) A past state of a burst supplement
3) Sexually transmitted disease, for example, gonorrhea or chlamydia can cause fallopian tube blockage
How would we analyze fallopian tube block?
The finding is made by tests for tubal patency like hysterosalpingography (HSG) or sonosalpingography (SSG). A radio-contrast fluid (which is noticeable on x-beam) is infused in HSG, and water in the event of SSG, through the cervix. Assuming the tubes are patent, the fluid fills the uterus followed by the tubes and afterward seen pouring out of the open finish of the tubes. if the result is inconclusive , laparoscopy is the highest quality level for diagnosis  of fallopian tube block.
How can women with blocked tubes become pregnant?
Blocked tubes can't be opened by endorsing drugs. It could be feasible to open the tubes by medical procedure at times and pregnancy can happen by natural means. Laparoscopic medical procedure is currently preferred to open surgery if the surgeon is trained for laparoscopy. Be that as it may, not all tubes are amenable to medical procedure and not all woman will imagine regardless of whether the tubes become open, as they may not be typical in their function. The option in contrast to a medical procedure to accomplish pregnancy is IVF. In Fact, IVF allows a more prominent opportunity of accomplishing pregnancy than medical procedure if tubal block is the only reason for infertility.
How can IVF help?
IVF gives the most obvious opportunity with regards to pregnancy in women with blocked tubes. It is conceivable on the grounds that the course of fertilization for which tubes  are required is completed in the laboratory. Furthermore, pregnancy rates are higher in IVF than normal conception since it includes overstimulation of ovaries to produce more than one egg, which builds the probability of pregnancy.

How is the Infertility Journey for Non-Carrying Partners?

Difference between IVF and ICSI Treatment:

What is the Difference Between IVF and IUI?

Why do miscarriages happen?

How Long Does It Take to Get Pregnant?